Skip to content
Home / Blog / Is Apple Maps a Fail? Or Is Apple On To Something?
Fresh digital marketing tips to help you grow your business - delivered right to your inbox.

For weeks, the internet marketing world held its excited breath as we awaited the arrival of Apple Maps. Google Maps has been the default mapping app on the iPhone for years, but beginning with the iPhone 5 and iOS 6, the default mapping app will be completely in-house with Apple Maps. Experts claimed in September that it would “change the face of local search” and give Google a run for its money. Now the dust has cleared, it’s time to take a look at what the new kid in town has to offer, and why the user response has been so lack luster.

First, it’s important to note what made this launch so dramatic. Apple promised to deliver features that would place the mapping app above its competitor, Google Maps. The advanced mapping features were designed to help the iPhone better compete with Android in the frenzy of the mobile market.

1. Yelp Review Data – Apple incorporated Yelp reviews into its business listing profiles for a dense picture of what local companies have to offer. Yelp has a rich user base stretching to even the most rural areas in the country, guaranteeing a known review source that is commonly trusted by the internet community.

2. Siri Voice Integration – By integrating voice command searches that work locally, Apple aimed to refine the complimentary GPS feature that helps users with questions like “coffee shop near me.”

3. 3D View Maps – An interactive flyover view lets you see major cities in a new way. Unfortunately, users have spotted plenty of funny glitches that show national monuments missing, roads that look like spaghetti, and buildings that defy the laws of physics.

4. Real Time Traffic – You can alter your route and get to where you need to be faster with details on what is causing current backups and slow downs.

Unfortunately there are several downsides to using Apple Maps, as I am sure many of you have personally experienced or heard about from your Apple friends.

1. Public Transportation Option – The mapping of public transportation routes are nonexistent in the new mapping app, which makes city-dwellers frustrated. The ever handy option to see what subway train you should take is not supported with Apple Maps, although you can download third-party plugins to accommodate your public transportation plans.

2. Glitches abound – Plenty of complaints have surfaced online, complete with screenshots of Apple Maps giving insufficient returns on mobile searches for things as simple as hotels. Many times, the returned results will only offer options in cities or towns miles away from the location of the user.

3. Entire cities have disappeared – There is not much to say about this significant problem with Apple Maps, reflected by the fact that Apple hasn’t found a way to sugarcoat this glitch.

The response to the launch of this mapping app has been so loud and rife with disappointment that Apple’s new CEO, Tim Cook, had to write a public apology and even suggested using other products while Apple revamps their cartography division. Mr. Cook wrote:

“While we’re improving Maps, you can try alternatives by downloading map apps from the App Store like Bing, MapQuest and Waze, or use Google or Nokia maps by going to their websites and creating an icon on your home screen to their web app.”

Taking a step back from the backlash, and looking at future opportunities, we can calm down the mob mentality and see what benefits are still at the heart of this new mapping tool. First off, Apple didn’t create the mapping service from scratch in the way that Google did with its mapping app. Without the advantage of trucks zooming the world’s streets, Apple used an estimated 20 sources to mix and match data in an algorithmic method to make a comprehensive map. The blending of multiple sources has been a bump they simply have not smoothed out yet. Google has improved over years and years of users actually altering and refining the service through constant use and suggestion. Apple will need the same collaboration, and they are well posed for it with their vast customer base.

Another important idea to note: competition is good and healthy! Google is a powerhouse in the internet world, and if Apple is trying to compete with their already flourishing mapping system, I say more power to them. Everyone seems to forget the days when Google would repeatedly lose entire towns during the infant stage of mapping, but of course they got better at their jobs over time. What we are seeing now is a smart and vivacious Fifth-Grader picking a fight with a Senior in High School. Apple was somewhat doomed to fail unless they blew it out of the water. I say we wait and watch this elementary schooler grow up, and eventually Google may be balding and outdated while Apple proves its ingenuity, growing with the times and its users.

With 30.2% of total mobile users using Apple and potentially the mapping feature on their device, the debut of Apple Maps is still a huge opportunity for small businesses to get found online by mobile users with Local Search. Especially business owners who find themselves in tight situations within the Google system — or find that no matter how they try, the street view makes their store front look unappealing. Small businesses might be able to find hope in Apple. Until then, the geeks will have to wait for an update with patience and a caramel macchiato. 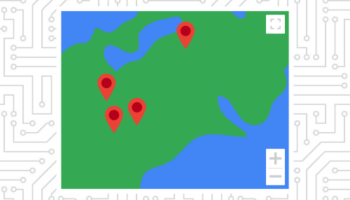